Wheels for Women works in partnership with the Sakhi Shelter for victims of domestic violence in Kerala, India to provide shelter residents and community members with the training necessary to become licensed auto rickshaw drivers (like taxi drivers in the U.S.). Through this training, abused women and victims of the sex trade gain the job skills needed to work towards financial independence and away from their abusers.

In 2010 Professor Kathleen Mulligan traveled to Kerala, India as a Fulbright scholar with her project “Finding Women’s Voices”, which focused on the empowerment of women through voice. One night she was invited to teach her workshop at the Sakhi Shelter. At the end of the evening, Kathleen’s husband, David Studwell, asked the director of the shelter what they needed more than anything. “We need a vehicle”, she said. “We need a way to rescue desperate women in the middle of the night”. Out of that conversation Wheels for Women was born. The following summer, Kathleen and David produced a benefit cabaret in Holland, MI and raised the money to purchase a new auto-rickshaw for the shelter. Since that summer they have produced seven more Wheels for Women cabarets with senior theatre majors at Ithaca College. The money raised from these cabarets has purchased an additional auto rickshaw for the shelter and trained over twenty shelter residents as licensed auto rickshaw drivers. As Beena Sebastian, the director of the shelter says: “Female auto rickshaw drivers are rare in India, but we are starting a revolution!” 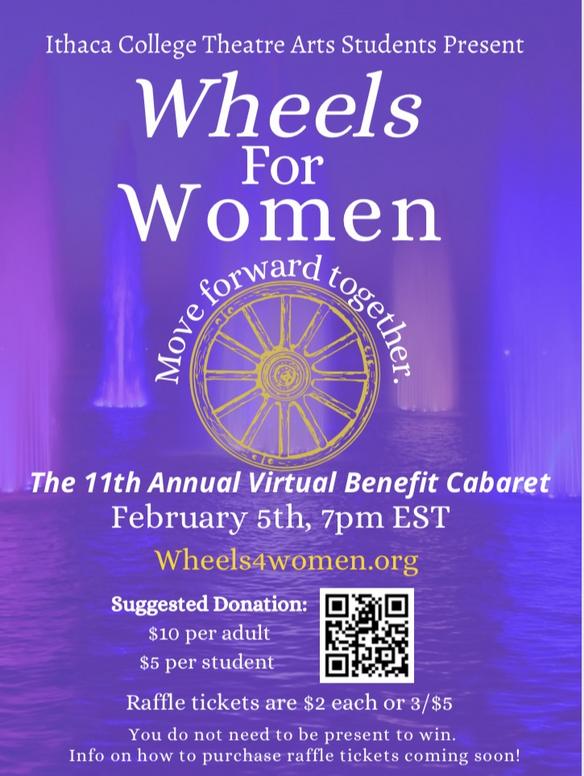 Admission and Donations
View on Mobile